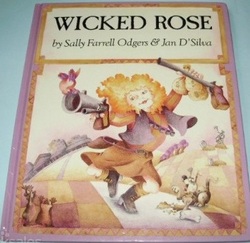 Wicked Rose was born bad (she bit the doctor's thumb as soon as she had enough teeth) and went on to become worse. During her incredible career she became a bushranger and married three times. Along the way, she had a daughter whom she named Nasty Nell. Eventually, on her third husband, Wicked Rose struck some luck - nothing fell on his head or peppered him with lead.

Wicked Rose is no role model, but her story, told in lively rhyme, is popular with readers over eight. The unusually-toned pictures (focussing on purple and orange) are by Jan D'Silva.

Wicked Rose is profiled at the Behind Sally's Books blog at ​http://behindsallysbooks.blogspot.com.au/2017/01/wicked-rose.html